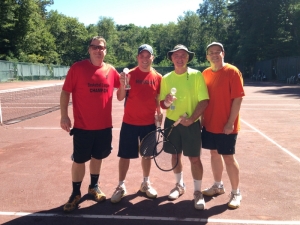 Bob “The Caveman” DiCara’s 4 year run as STC A division singles champion
came to an end on Sunday as David “Killer” Kroll played at a 5.0 + level to
win the title. David advanced to the final with a win over Russell Neale,
who swept through a tough group to reach the semifinals. In the other semi,
Rizwan Shamsi matched the Caveman drop shot for drop shot over more than two
and a half hours, forcing a third set tiebreak. Rizwan saved three match
points in the breaker before the Caveman prevailed 7 points to 5 to reach
the final. 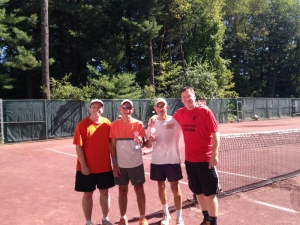 10 – 8 ARE LEN’S FAVORITE NUMBERS
In the B division, Len Travers and Ben Cooley each advanced to the final
with hard fought wins in hot and humid conditions over Joe Hefez and Allen
Davis, respectively. Sunday brought terrific tennis weather and Len and Ben
played a terrific final match. Ben started off strong and took a close
first set, before Len’s all-court game flourished in the second as he evened
the match. The super tiebreak was a closely contested nail biter that Len
was able to pull out 10 – 8. This was Len’s second B division singles title
in three years, the previous one also coming by virtue of a 10-8 win in a
third set tiebreak.