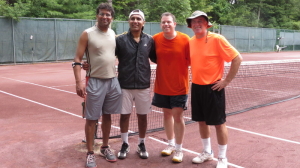 Congratulations to Rizwan Shamsi and Ram Chakrapani who won the Open Doubles “A” division.

The hard fought match finished after a rain delay from the prior weekend.  They won the match against Bob DiCara and Scott Zenack who have won the tournament the five previous years.  The spectators were also rewarded with some fabulous up close and personal viewing.

The “B” division finals have been delayed due to weather and vacation schedules. 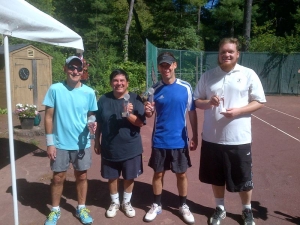 Hamzah Henshaw and Alex Linardi prevailed over Alan Ames and Len Travers 6-3, 6-4 in a well-played B doubles final before an enthusiastic crowd on court one on Sunday. Veterans Alan and Len fought valiantly, nearly overcoming a 2-5 second set deficit, but Hamzah’s strong serve and Alex’s net play proved to be the difference. Thanks to everyone who participated in tournaments this year, spectators who came to watch – which adds to the tournament atmosphere – and to the tournament directors and court maintenance staff who make our tournaments possible.